If slash commands are not appearing in your server, try the following:

If you have tried all of these and are still having issues, reach out to us in our Support Server.

If you get a "This Interaction Failed" error when using slash commands, try updating Discord. If that does not work, make sure that UnbelievaBoat is online and that there is not currently an outage.
If none of this works, reach out to our Support Server

How Do I Set Permissions?#

Slash commands can only use external emojis if the @everyone role has the Use External Emoji permission. 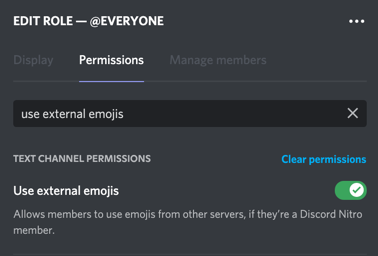 Can I Change the Prefix?#

You cannot change the prefix of slash commands, as it is built into Discord.

Currently, slash commands are not fully replacing normal commands.
Eventually, the bot will fully move to slash commands. The exact date is TBD but it will be later this year.

Will More Commands be Added?#

More commands will be added to slash commands as time goes on. The initial release doesn't contain many commands, but more are coming!